Photos, video and my speech (PDF) of the ceremony awarding the honorary doctorate to the dentist Orlando Monteiro da Silva, on January 15th at the Faculty of Dental Medicine, University of Porto.

The dentist and President of the Portuguese Dental Association was awarded the title of doctor honoris causa by the University of Porto, on January 15th 2014, and dedicated this tribute to those who helped the Portuguese population  become aware of the importance of oral health. 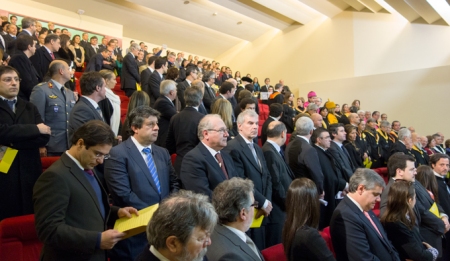 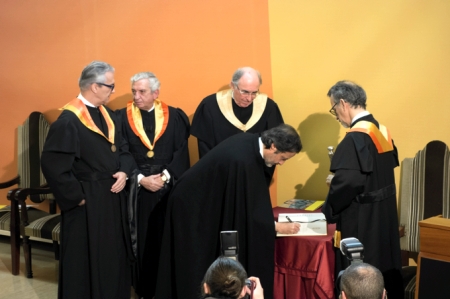 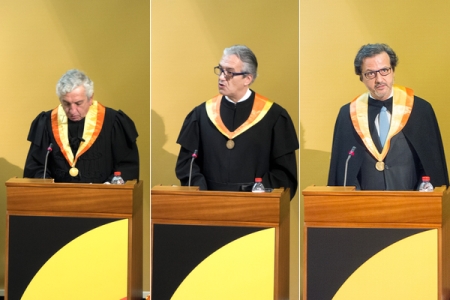 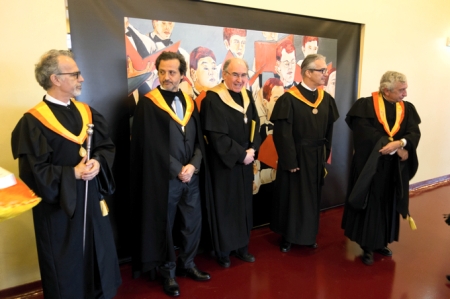 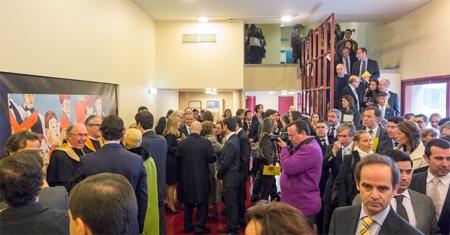 “It is a tribute to Portuguese dentistry and all those that since the early 70s, which was when dentistry appeared in Portugal, contributed to the Portuguese population’s awareness of the importance of oral health in overall health and quality of live”, said Orlando Monteiro da Silva.

“It is itself a genius and visionary initiative of two Professors, Afonso Pinhão Ferreira , Director of FMDUO, and António Felino, president of the Scientific Council, an additional milestone of enormous significance, and most relevant to the development and consolidation of dentistry” he emphasized in his speech.

The President considered that it was “the recognition, more than fair, of the path of many in the establishment of dentistry, “having found in myself”, possibly, the best placed recipient.”

“We cannot, however, forget to mention the public policies of education, prevention and treatment, through the National Program for Oral Health and Regional Programs, articulated with OMD, which contributed decisively to the improvement of oral health indexes of populations, helping Portugal to reach, in only a few years, the average of EU countries and the OECD.” he underlined.

Orlando Monteiro da Silva was born in Porto and graduated from Dental Medicine in the University of Porto.

He is President of the Portuguese Dental Association since 2001, and has occupied several positions in national and international renowned institutions.

In 2003 he was elected to the board of the Council of European Dentists, CED, having later served a term as its president, between 2006 and 2009.

In 2004 he was a candidate for the council of FDI – World Dental Federation, having become the first Portuguese to assume decision-making positions within this global organization of dentistry. He promoted the affiliation to FDI of East Timor, Angola, Mozambique and Guinea-Bissau and the Lusophone Dental Association.

The importance of strengthening Portuguese dentists and dentistry at national and international level, as well as the relevance of learning and bringing experiences from outside in, have marked his work as President of the Dental Association.

In 2010 he acted as president of FDI – World Dental Federation, a position he held until the end of term in August 2013. He was the first Portuguese to become President of the most important organization of world dentistry.

In 2011, he was elected president of the National Council of Professional Bodies (CNOP) and in 2012 took over as Director of the Economic and Social Portuguese Council, for the four years between 2011 and 2015.

The University of Porto conferment of degree doctor honoris causa to Orlando Monteiro da Silva, by proposal of the Faculty of Dental Medicine. It’s the first time that a dentist is recognised in Portugal.

With origins dating back to the eighteenth century, the University of Porto is currently one the most prestigious higher education institutions of Europe.

A public institution close to 32,000 students, 2,400 teachers and researchers along with 1,600 administrative staff attend its 15 schools and 60 scientific research units, spread across three university campuses located in the city of Porto.

With 14 faculties and a business school, the University of Porto provides an exceptional variety of courses, covering the whole range of study areas and all levels of higher education. In fact, offering over 600 training programmes per year (from degrees to continuous professional training), the University of Porto has teaching solutions for everyone.

The immediately previous distinguished was Jean-Claude Juncker in 2013. See all 79 contemplated here since 1921.

Orlando Monteiro da Silva was born in Porto and graduated in dentistry from the Faculty of Dental Medicine, University of Porto.

President of the Portuguese Dental Association since 2001, Orlando Monteiro da Silva has occupied several functions both in national and international prominent institutions.

In 2003 he was elected to the board of the Council of European Dentists, CED, having later served a mandate as its president, between 2006 and 2009.

In 2004, he was a candidate for the council of FDI – World Dental Federation, having become the first Portuguese person to assume decision-making functions within this global organization of dentistry. He promoted the adhesion of East Timor, Angola, Mozambique, Guinea-Bissau and the Lusophone Dental Association to the FDI.

The importance of advocating for Portuguese dentists and dentistry both nationally and internationally, as well as for the relevance of learning and of bringing experiences from abroad, have marked his work as President of the Portuguese Dental Association, Ordem dos Médicos Dentistas, regulatory body of the profession in Portugal.

In 2011 he acted as president of FDI – World Dental Federation, a position he occupied until the end of his term in August 2013.

In 2011, he was elected president of the National Council of Professional Associations (CNOP) and in 2012 he took office as councillor of the Portuguese Economic and Social Council, for four years from 2011 to 2015.